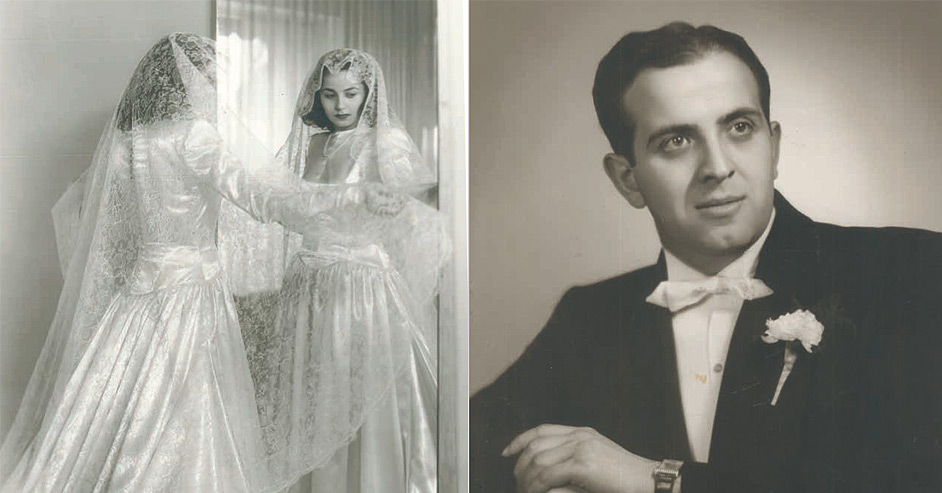 Edmund and Bettejean Tie the Knot on November 23, 1947

Edmund T. Ahee opened his first store in his uncle’s bowling alley located on Harper and Van Dyke in Detroit.

After four years in the bowling alley, Edmund moved Ahee Jewelers to its own storefront on the same block of Harper and Van Dyke. He remained ever grateful to his uncle for giving him a chance. 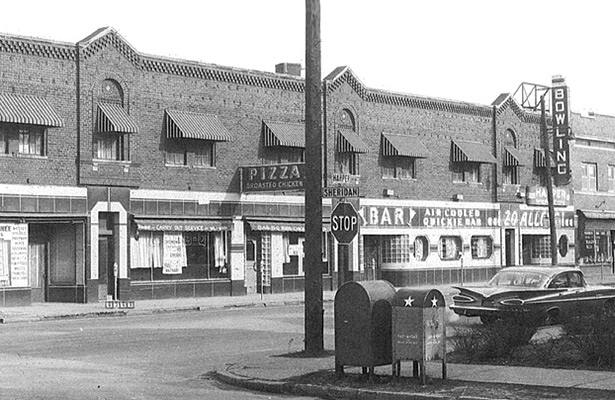 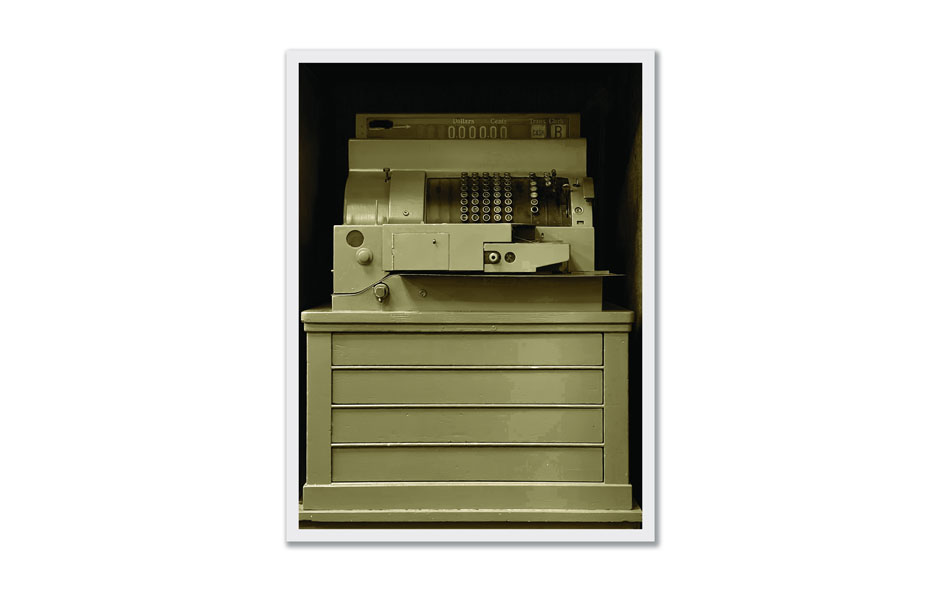 As Ahee Jewelers became busier and busier, Edmund decided to invest in a new cash register, and he found the perfect one in 1949 at an auction. He considered it his lucky cash register and refused to part with it, even when it became obsolete. Although it can only print dates through 1955 and can’t ring sales greater than $999, the register still has a spot in the Ahee store, serving as a cheerful reminder of Edmund’s great progress and success.

Edmund worked tirelessly to pay his bills and grow his business. One day in 1950, a gentleman referred by a friend entered the store to shop for an engagement ring. He didn’t find exactly what he was looking for, thanked Edmund, and turned to leave. Just then, Edmund exclaimed, “Wait! I have one more ring in the back.” What the customer didn’t know was that Edmund had brought Bettejean’s engagement ring to the store that day to be cleaned, and that was the ring he was referring to. Edmund brought out the ring and showed it to the customer. “Perfect,” the customer said, and purchased the ring. Later, when Bettejean was asked if she was upset by this exchange, she responded, “No, I knew he would replace it with a larger diamond.” 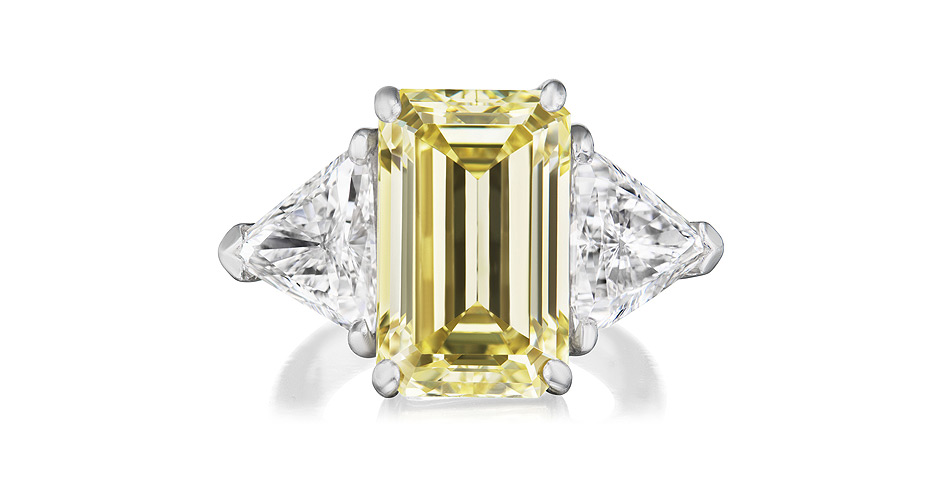 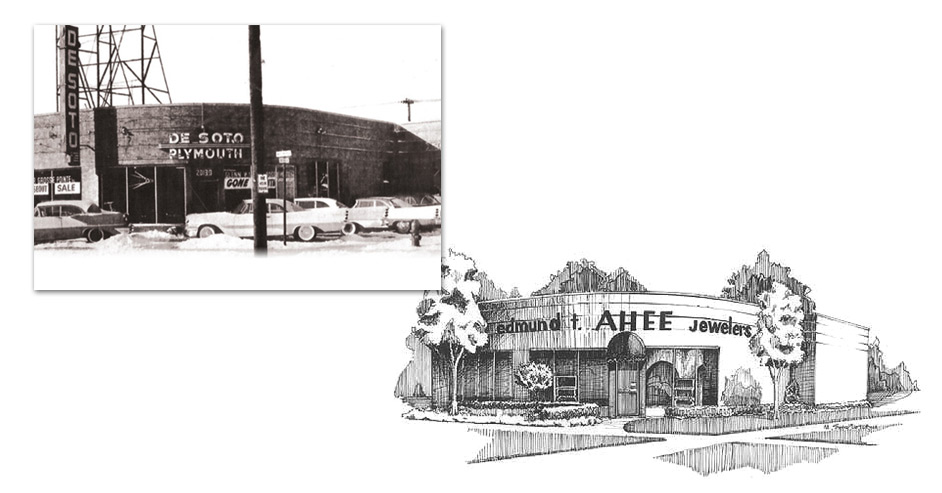 In 1968, as Ahee Jewelers continued to gain popularity, Edmund and Bettejean searched for a larger space for their store. They found it in the DeSoto car dealership at the corner of Mack and Oxford in Grosse Pointe Woods, the store’s current location. With Bettejean’s eye for design and detail, the dealership was transformed into an elegant jewelry store.

In 1969, Edmund purchased a large jewelry collection from the estate of Matilda Dodge Wilson, widow of automobile pioneer John Francis Dodge and one of the wealthiest and influential women of her time. In addition to serving as President of the American Stock Exchange and the first female Lieutenant Governor of Michigan, Matilda was also known for her philanthropy and her appreciation of cultural artistry, which is evidenced in her curated collection of jewelry.

Ahee’s acquisition of the estate includes one-ofa- kind Cartier pieces from the 1920s, Matilda's diamond wedding ring, a rare cat's-eye necklace, a carved emerald necklace, and a selection of exceptional bracelets and brooches.

A few pieces are highlighted on the right. 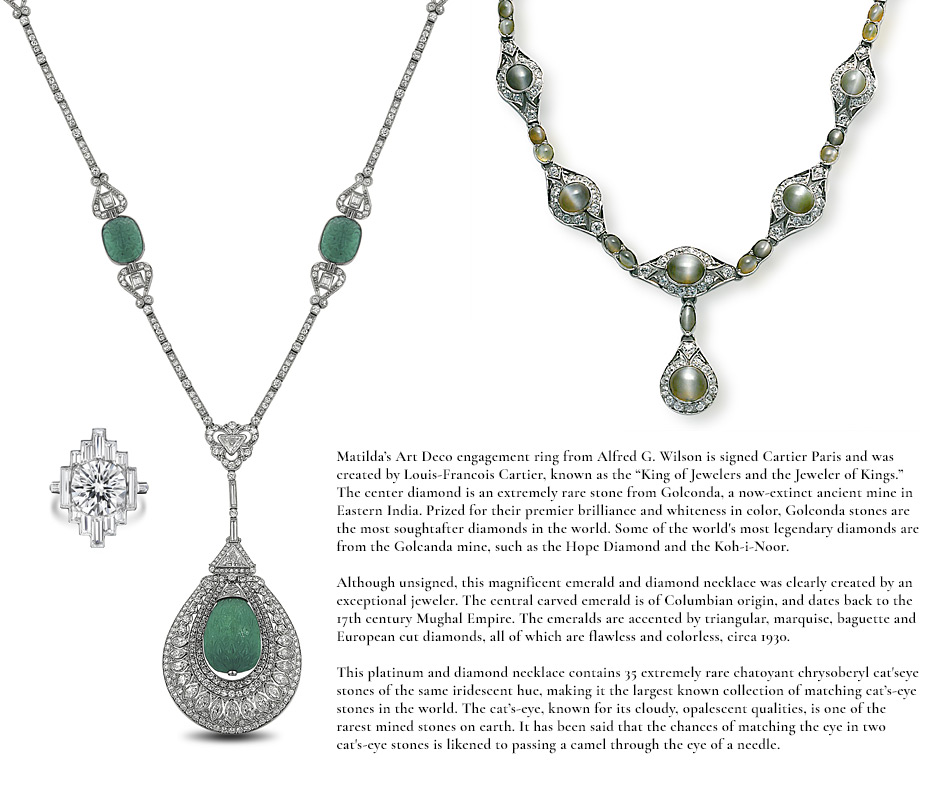 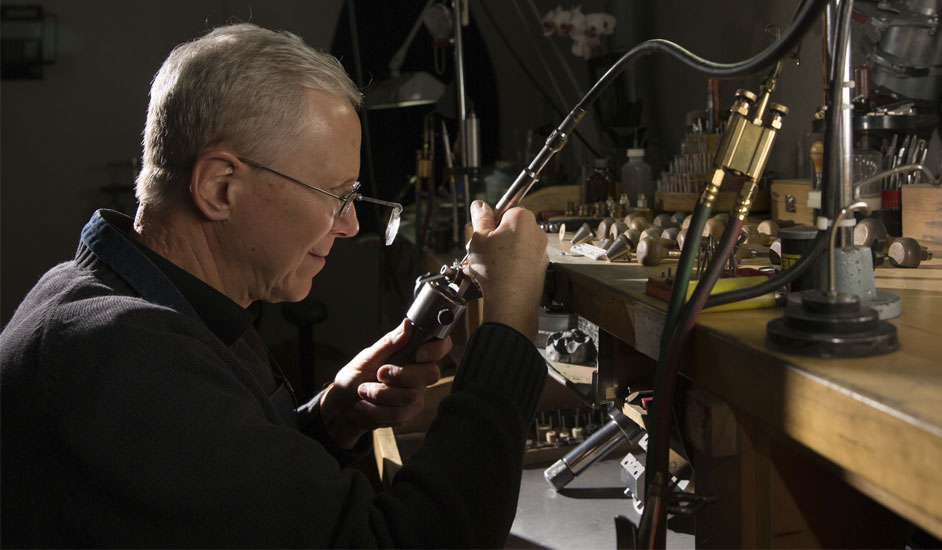 1976
“Backroom” at Ahee is Established

In 1976, Ahee’s design studio and workshop, was built in the back of the store’s building, hence its name, the Backroom. Highly-skilled craftsmen, talented designers and expert gemologists were hired to work their magic in this new space, resulting in the creation of some of the most beautiful jewelry in the world.

In 1981, Edmund and Bettejean held a meeting with their seven children, Lowell, Pamela, Edmund Jr., Peter, Greg, Chris and John. Edmund said to them, "Thank God none of you will ever not know where your next meal is coming from."

Edmund grew up in Detroit during The Great Depression. At the age of 13, Edmund was pushed into the role of supporting his mother and siblings when his father passed away. Many of their friends stood in line at the Capuchin Soup Kitchen for food, a visual that made a big impression upon young Edmund.

Now in a position to give back, Edmund asked his children to help create an event that would raise awareness of the Capuchin Soup Kitchen and all of the work it does for Detroit's less fortunate. The Ahees came up with the Capuchin Souper Celebration, an event they underwrote and produced themselves. Held at Detroit’s Roostertail, the celebration was attended by several hundred people, and $8,000 was raised. The Ahees never imagined what would happen in the following years - the event grew exponentially, outgrowing several venues to land at its ultimate destination, Comerica Park in Detroit. Today, more than 40 years later, thousands of supporters attend the now named, “Capuchin Souper Summer Celebration, which to date has raised over $7 million dollars. 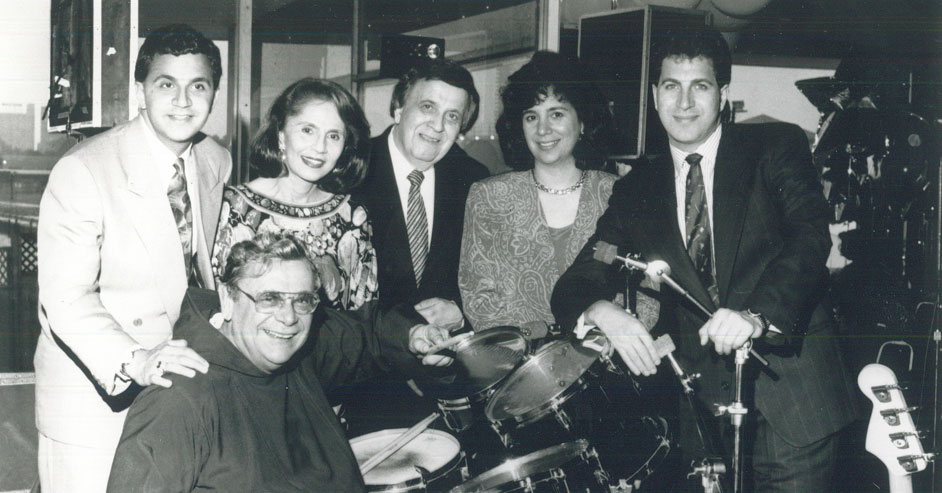 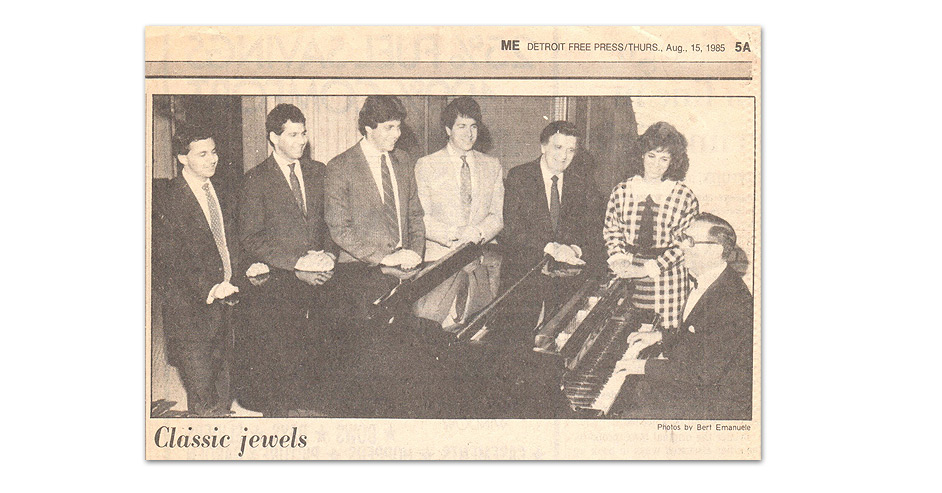 In October of 1984, a piano was rented and a concert pianist, Robert Capaldi, was hired to play classical music at the store for holiday shoppers. He played every Friday and Saturday from 11:30 am to 5:30 pm. After the third day of Robert’s playing, Edmund liked the idea so much that he purchased a baby grand Kawaii for the store. In a 1985 Detroit Free Press photo caption, Peter Ahee is quoted as saying, “The customers love it. In fact, it’s a mixed blessing, because some of them now will come in only on the weekends, and Saturdays are almost too busy.” 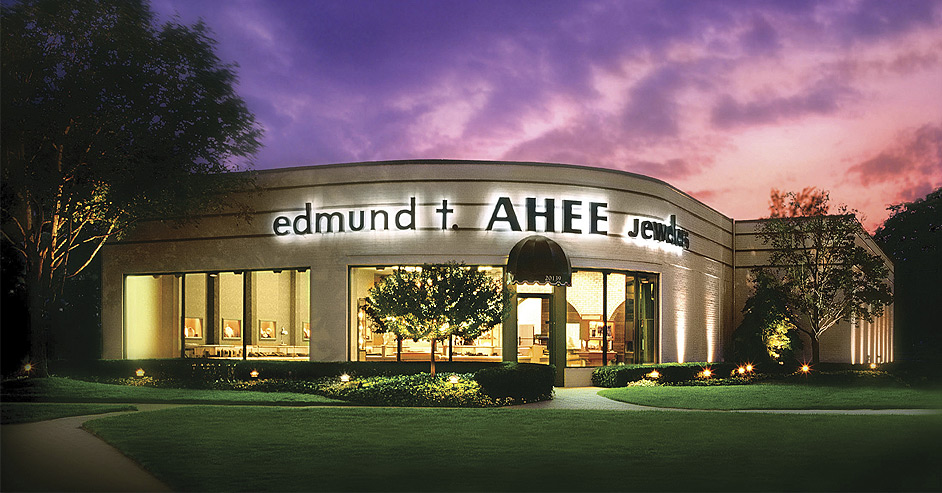 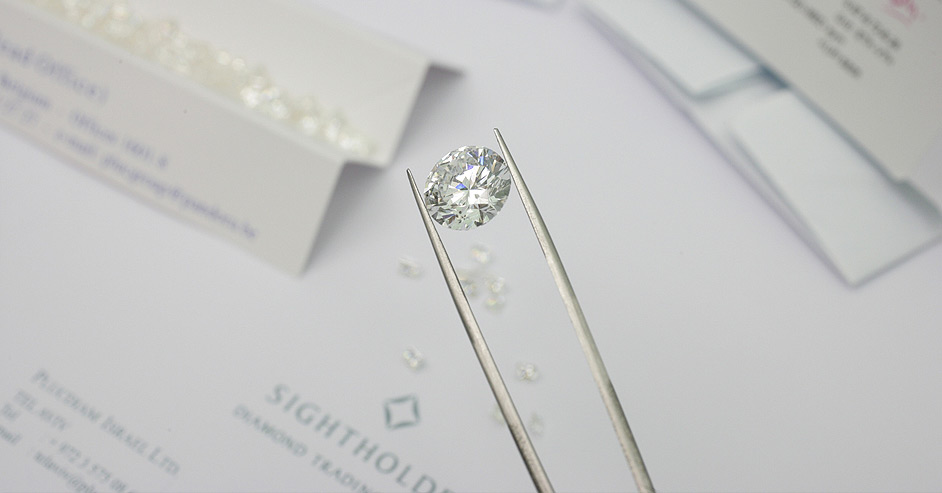 In 1987, Ahee Jewelers began its 35-year partnership with the revered Pluczenik Diamond Company of Belgium. This unique relationship gave Ahee the capability of purchasing diamonds directly from the mines vs. diamond brokers. Their partnership also allows Ahee exclusive access to some of the world’s finest diamonds at the greatest values.

1987
A Commission for the Pope

Over the years, Ahee Jewelers has had the rare privilege of creating jewelry for the church. The ultimate honor came in 1987, when Cardinal Edmund Szoka asked Ahee to create the jewelry for the visit of Pope John Paul ll, recently canonized as Saint John Paul the Great. Ahee craftsmen worked feverishly around the clock to create an inspired design with meticulous workmanship of the sacred items. They created a set of three pallium pins representing the three nails of Christ in 18k gold with amethyst having a cross, star and thorn motif. For the Ahee family, this honor was a true blessing. 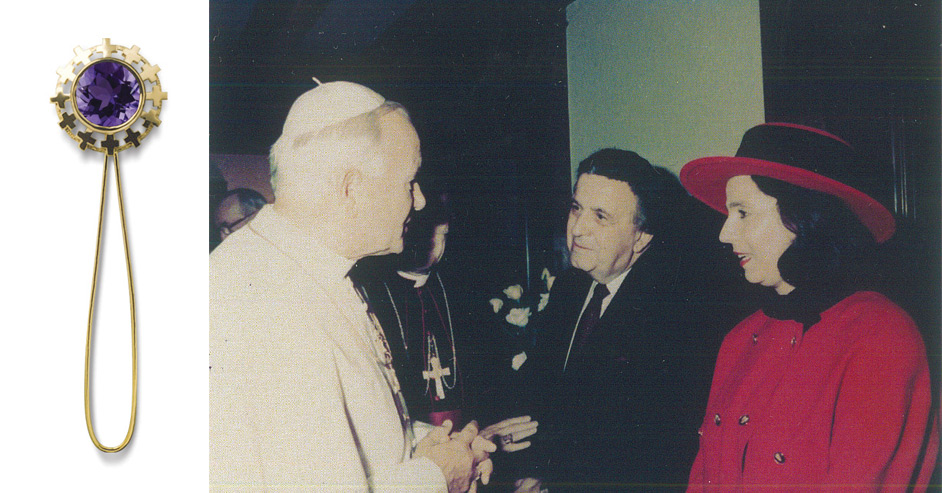 Competing with elite designers from all over the world, including those from Paris, London and New York, Pamela Ahee Thomas brought home the top honor in 1998 with her first-place win of the Platinum Guild International Award for her exquisite design of a brooch featuring a baguette cut diamond in platinum. 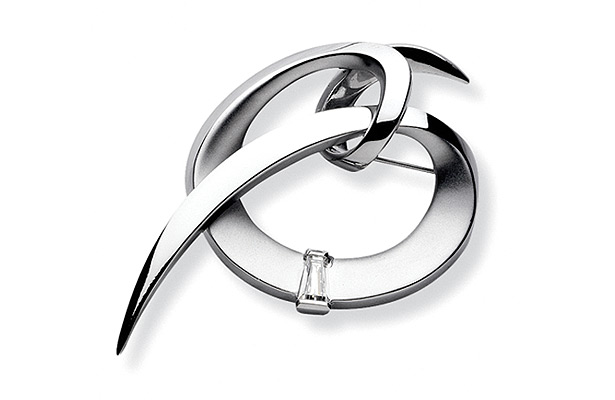 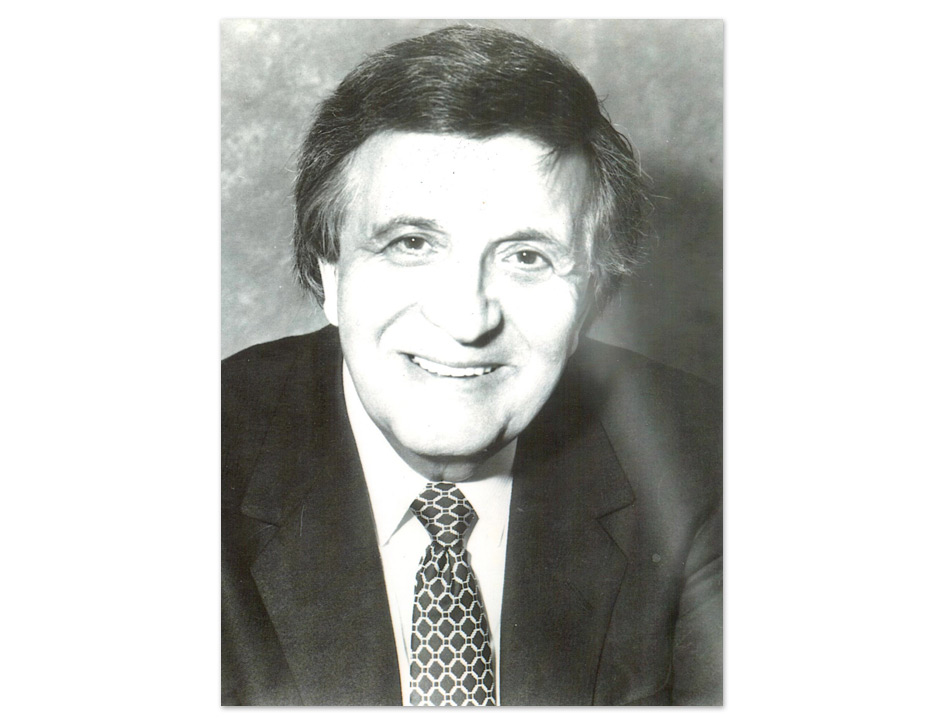 Edmund T. Ahee, Sr. was a man of implicit integrity. He was upright, sincere and generous - a humanitarian in every sense of the word. Forty years ago, Ed, the name he went by with family, indicated that he wanted his family to help support a charity dear to his heart, the Capuchin Soup Kitchen, and for 18 years, Edmund excitedly presided over the annual "Capuchin Souper Summer Celebration" until 1999, the year he passed away. True to his foresight, his children and grandchildren have continued to fulfill his legacy by carrying on the Capuchin fundraiser.

Jean (Jennie) Joseph, Bettejean Ahee’s mother, was an invaluable asset to Ahee Jewelers. She was loyal and devoted, and she attracted a major following - whenever her clients needed suggestions for gift-giving, she had an exceptional flair for recommending the perfect present. For 35 years, she was also admired for her meticulous grooming and stunning appearance. 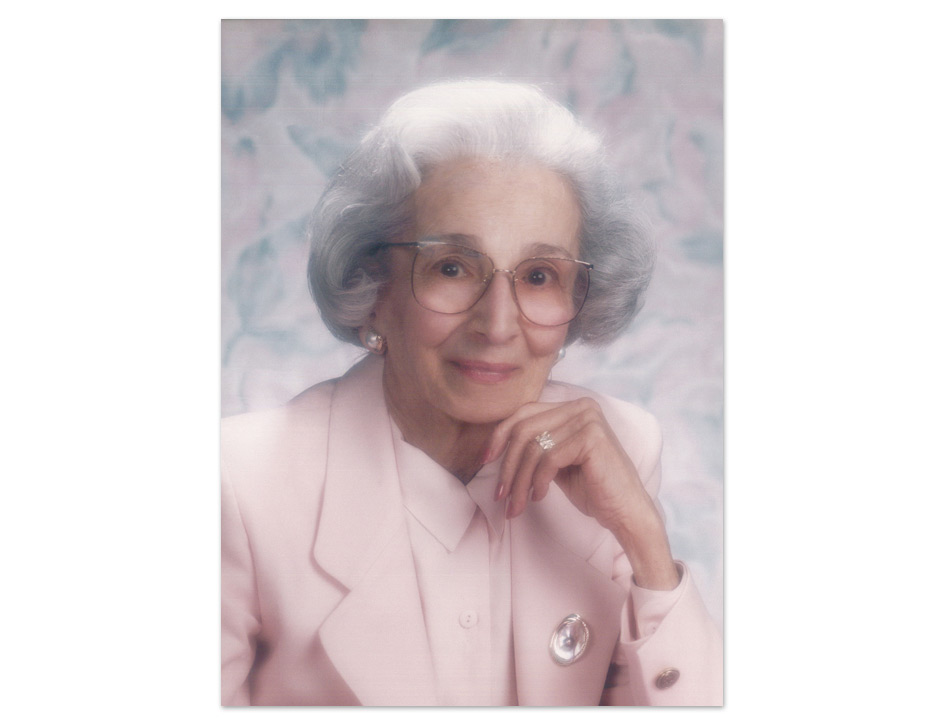 2000
The Ahee Holiday Catalog Gets a Local Makeover

Ahee Jewelers began producing their holiday catalog in the 1990s. The annual publication, now mailed to over 35,000 homes each year, proved to be very popular among customers, who often came in with marked pages, asking about specific items. In 2000, the catalog received an upgrade when Ahee Jewelers worked with family friend and model Kate Ryan to create a series of stunning photos that told the Ahee holiday story. In the years that followed, Ahee continued working with Kate in addition to other local models, including Julia Kaiser, beginning in 2015, and Ellie Ottaway Josi in 2018. (1) Model Kate Ryan. (2) Model Julia Kaiser. (3) Model Ellie Ottaway Josi.

The 2021 Ahee Catalog style was a nod to past Ahee catalogs. It took inspiration from Ahee catalogs from the 1990s like the white marble background which was a frequent backdrop to the jewelry at that time. 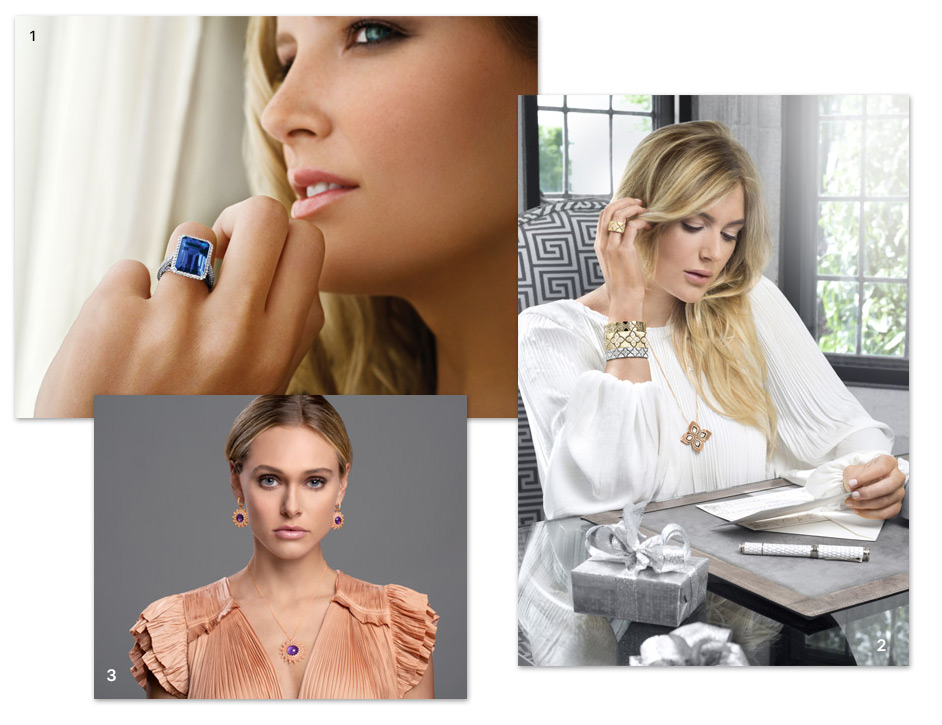 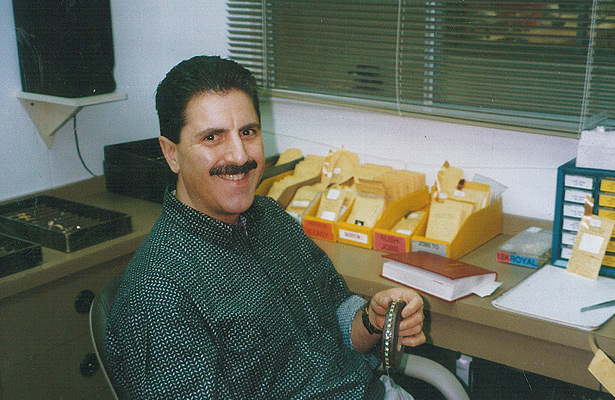 Edmund T. Ahee, Jr. was the quintessential perfectionist. He had exceptionally high standards and was dissatisfied with inferior work. He insisted that all completed jewelry repairs that passed his desk for inspection were impeccable. Eddie left an indelible mark on all of us. His example inspired us to also strive for perfection. He will be forever sorely missed.

In 2008, Ahee Jewelers finished construction of its new watch service center. The state-of-the-art studio has to be kept sparkling clean in order to ensure that even the slightest particle of dust is kept away from the hundreds of tiny watch components. Ahee's certified horologist, Gerald Keys, graduated from the top schools and apprenticed with Rolex before working heading Ahee’s watchmaking shop. Gerald meticulously examines each and every component, then cleans, oils and reassembles them into the engineering marvels they were designed to be - it's how the best timepieces in the world remain timeless. 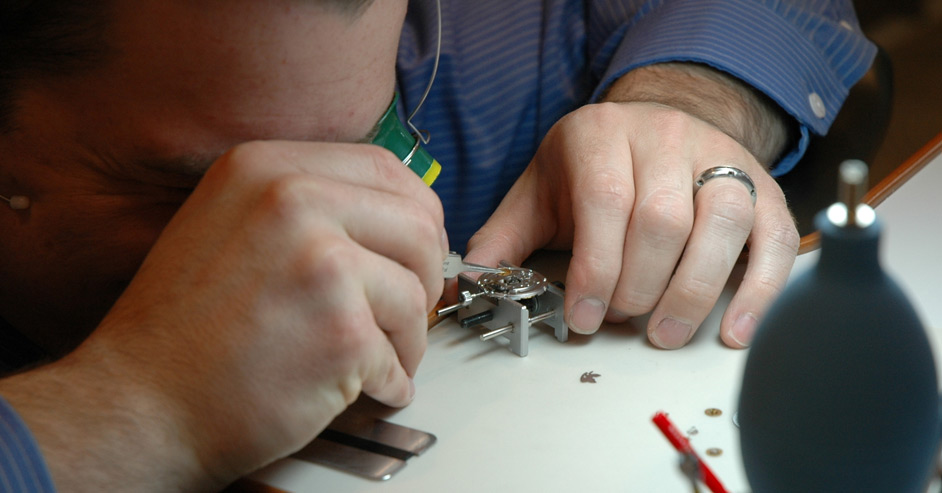 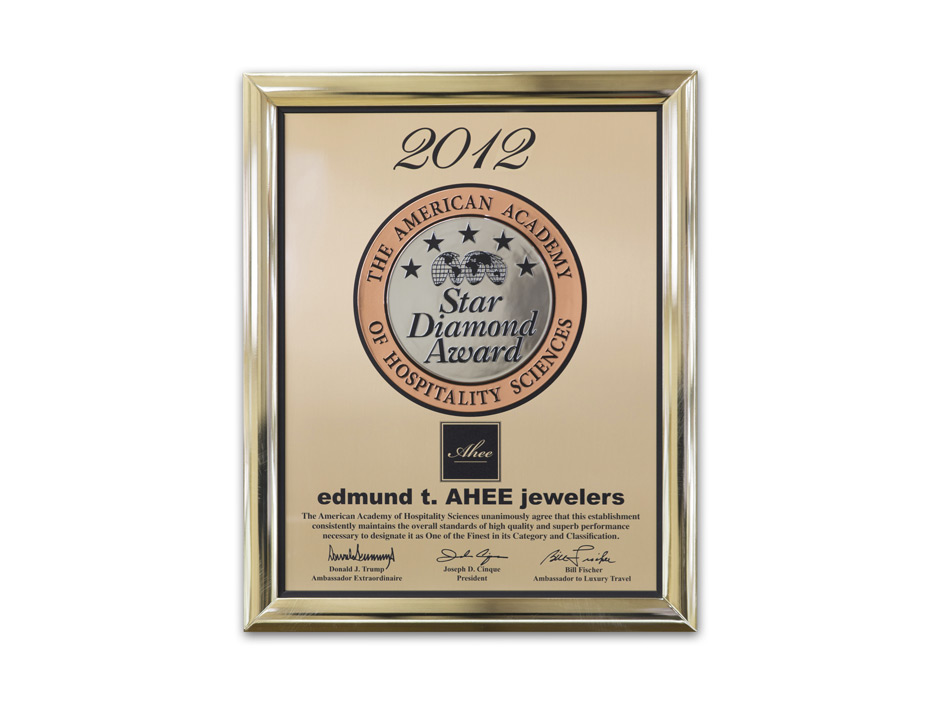 Founded in 1949 by the American Academy of Hospitality Services, this award recognizes excellence in travel, cuisine and luxury products and services. Normally reserved for the hospitality industry, this particular award was an extra special honor, as Ahee Jewelers was the first retailer in the world to receive this coveted distinction.

2013
The Ahee Holiday Bow is Revealed

The holiday season is always such a festive time at Ahee Jewelers. In 2013, the Ahees wanted to make the entire store look like a holiday gift sitting under a tree in the snow – like a Currier and lves painting. With the help of a very creative landscaping team, the entire 6,500 square feet of the store was wrapped with a burgundy ribbon, and a giant bow was placed on the roof over the front door. Hundreds of thousands of LED lights were then hand-sewn into the bow for a truly remarkable presentation. 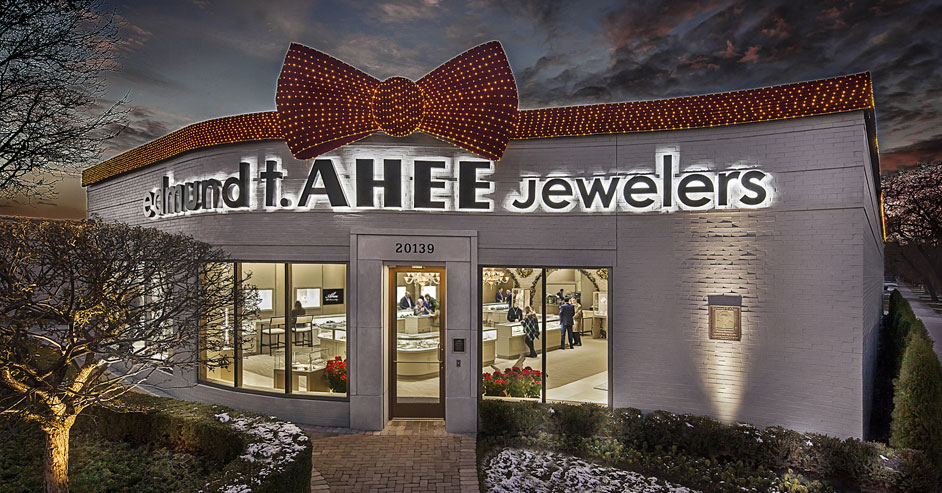 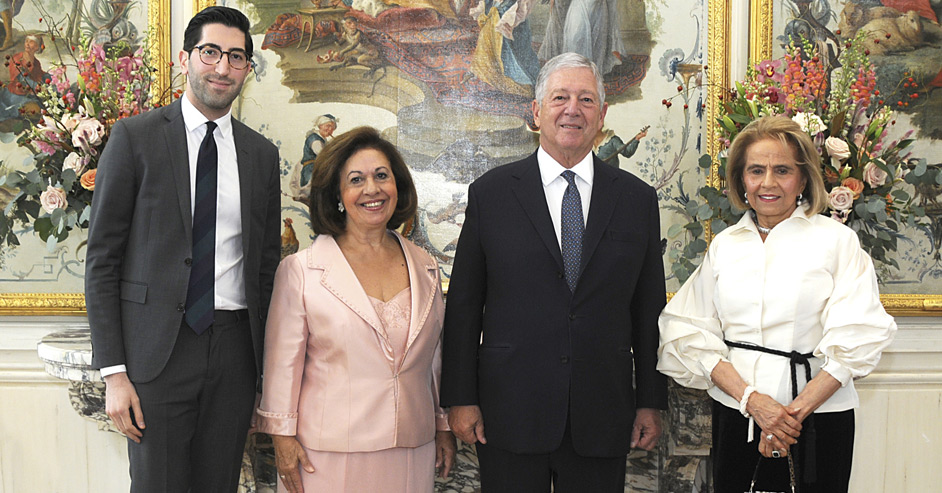 The Crown Prince Alexander and his wife, Princess Katherine of Serbia visited Detroit in 2016 during a medical mission to help combat hearing loss in Serbia. Ahee Jewelers was given the honor of presenting the royal couple with a custom-designed brooch, created with diamonds and an exquisite pearl in 18k yellow gold.

The Ahee Jewelers showroom underwent an extensive expansion and remodel in 2018. The project took six months to complete and included tearing down the building’s north wall to create a new boutique for luxury watchmakers Patek Phillipe and Cartier. The remodel also revealed new flooring, seating and furnishings, allowing for the expansion of Ahee’s designer jewelry collections, as well as a larger selection of Ahee’s own in-house line. 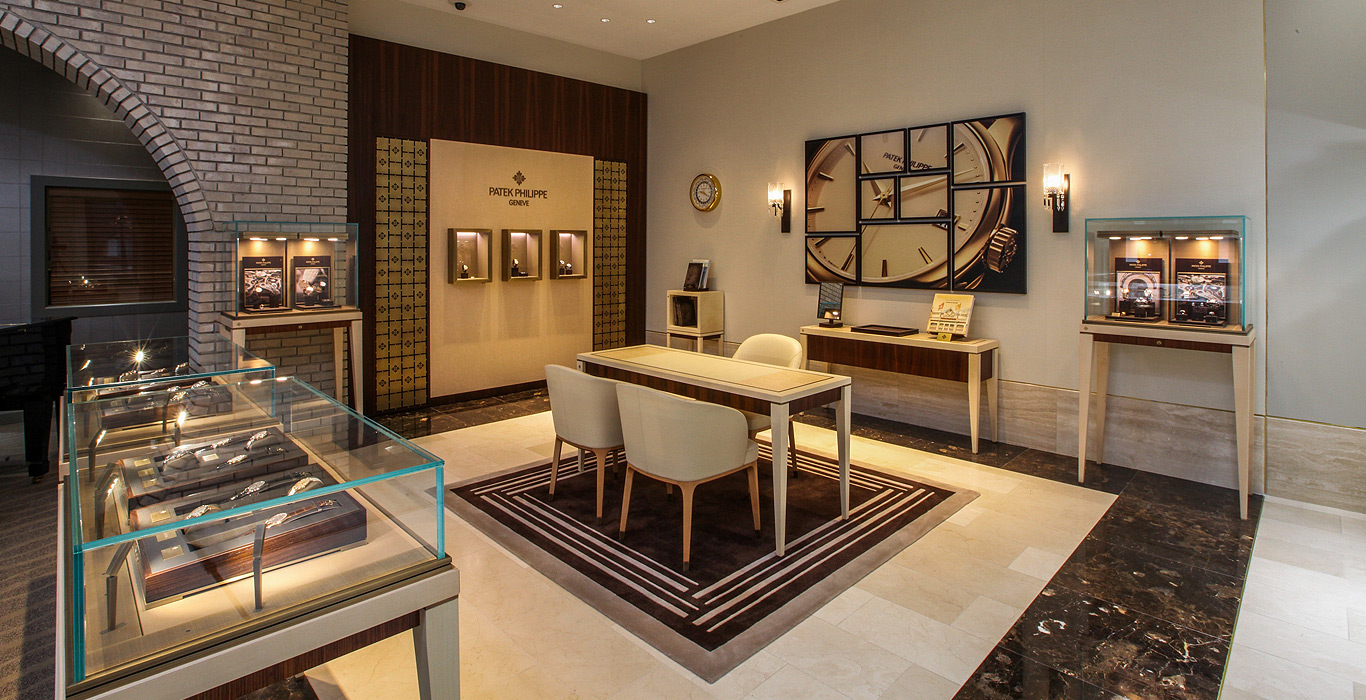 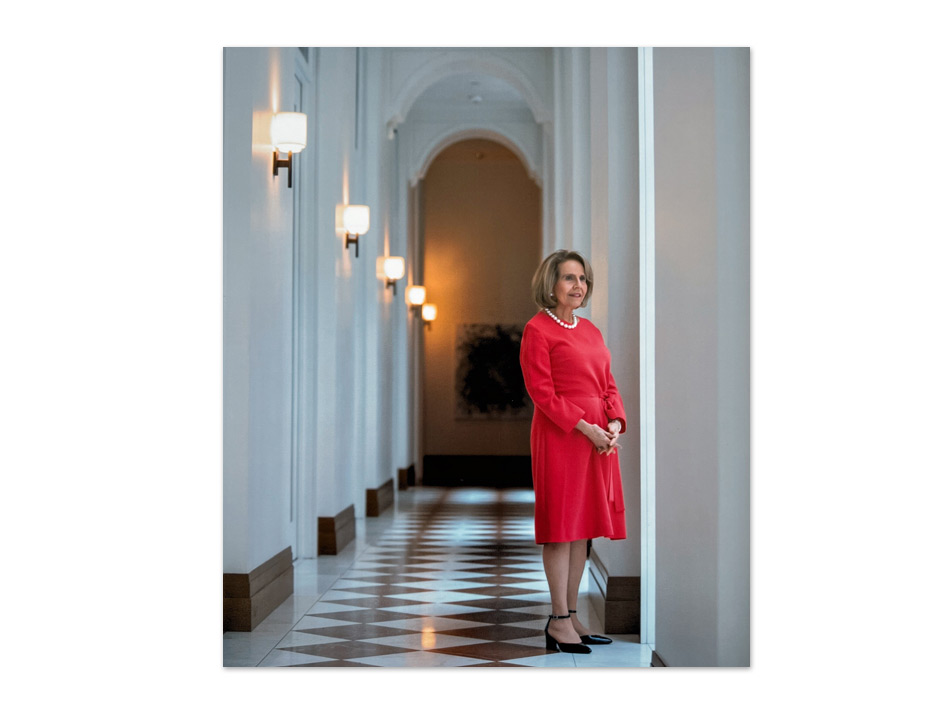 Bettejean Ahee was a devoted mother, grandmother, great-grandmother and a true friend to the community. She was a driving force behind the success of Ahee Jewelers and a visionary whose discernment for style and design helped turn a car dealership into the elegant showroom Ahee is today. A lifelong philanthropist and founding parishioner of Our Lady Star of the Sea, Bettejean was committed to giving back to others. She will be forever missed.

John Ahee will be remembered for his deep love of faith, family and community and for his kind heart and immense generosity. He considered his customers his family and had a genuine passion for his work as Vice President of Ahee Jewelers. After his first cancer diagnosis and brain surgery treatment in his early 30s, he treated every day thereafter as a gift. John was a true treasure to all who knew him. 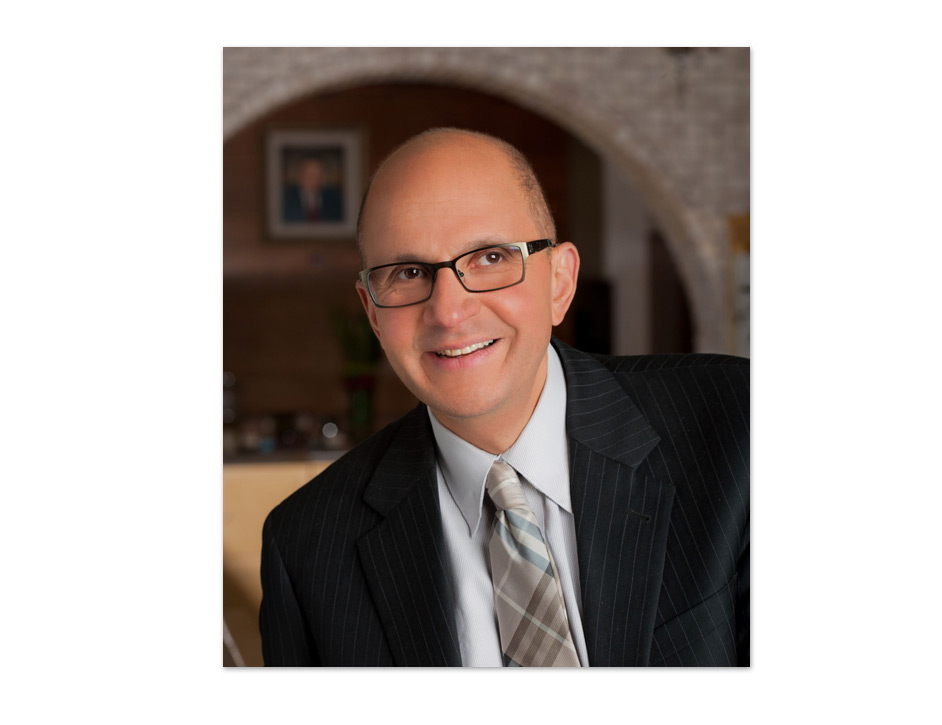 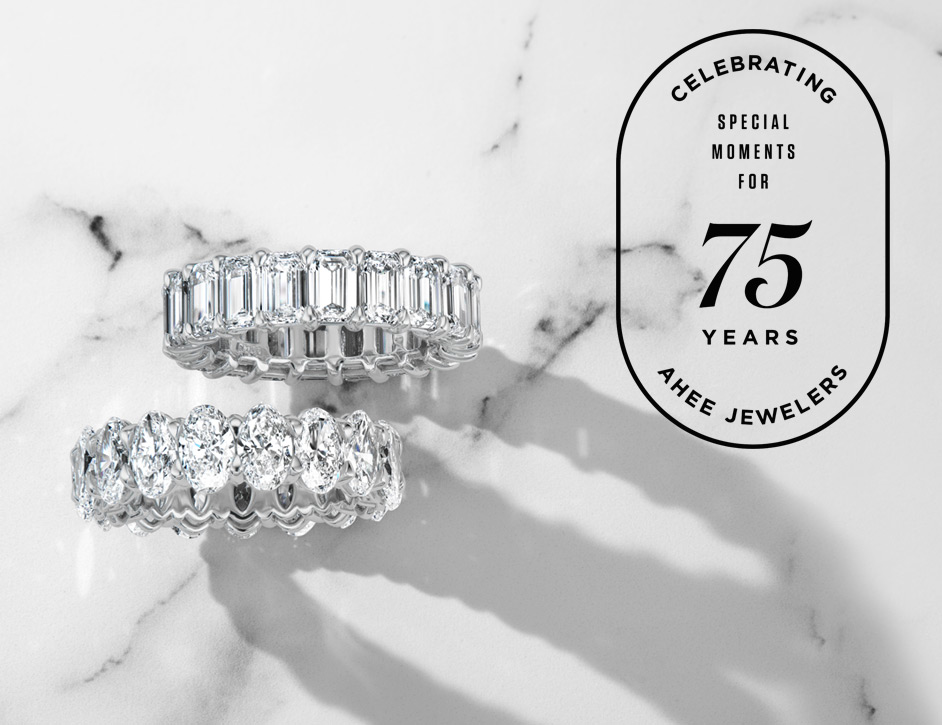 "It was through Ed’s foresight that his legacy has been perpetuated by his children and multiple grandchildren." -Bettejean Ahee

A Legacy of Service